Okapi’s Athabasca portfolio includes 75 granted mineral claims covering over 55,000 hectares located along the margin of the Athabasca Basin or in the Carswell Impact Structure where depth to the unconformity is relatively shallow being 300 metres or less and typically closer to 100 metres, making them ideal for targeting shallow high-grade uranium deposits. 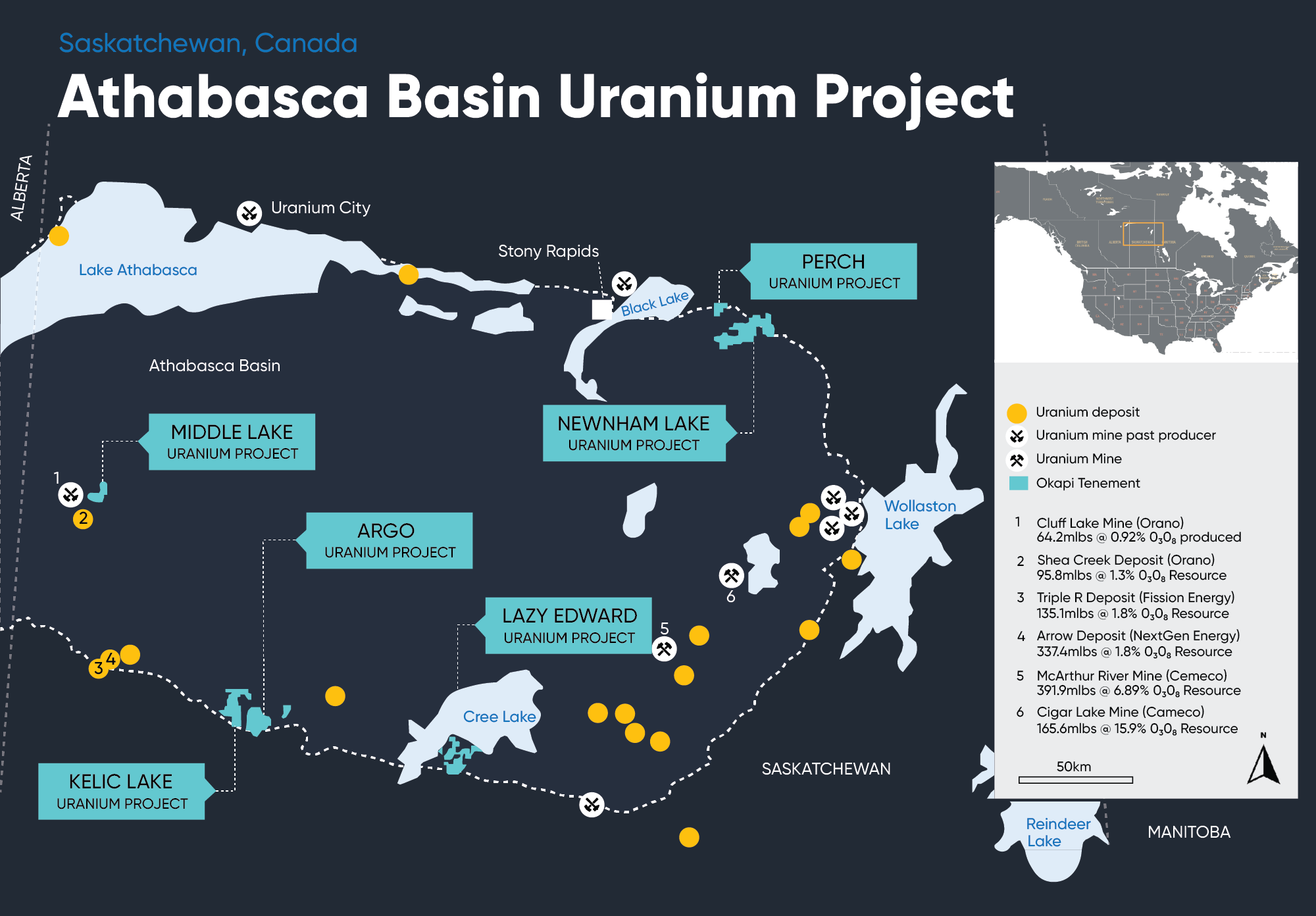 During the June quarter of 2022, Okapi received from the Ministry of Environment, Government of Saskatchewan, a Crown Resource Land Work Authorization, an Aquatic Habitat Protection Permit, a Temporary Work Camp Permit, and Forest Product Permit. Together these permits will allow the company to drill up to 10,000m in 24 drill holes at its Middle Lake Uranium Project as well as conduct ground based geophysical surveys of up to 100-line kilometres. The permit is valid through to October 2023. 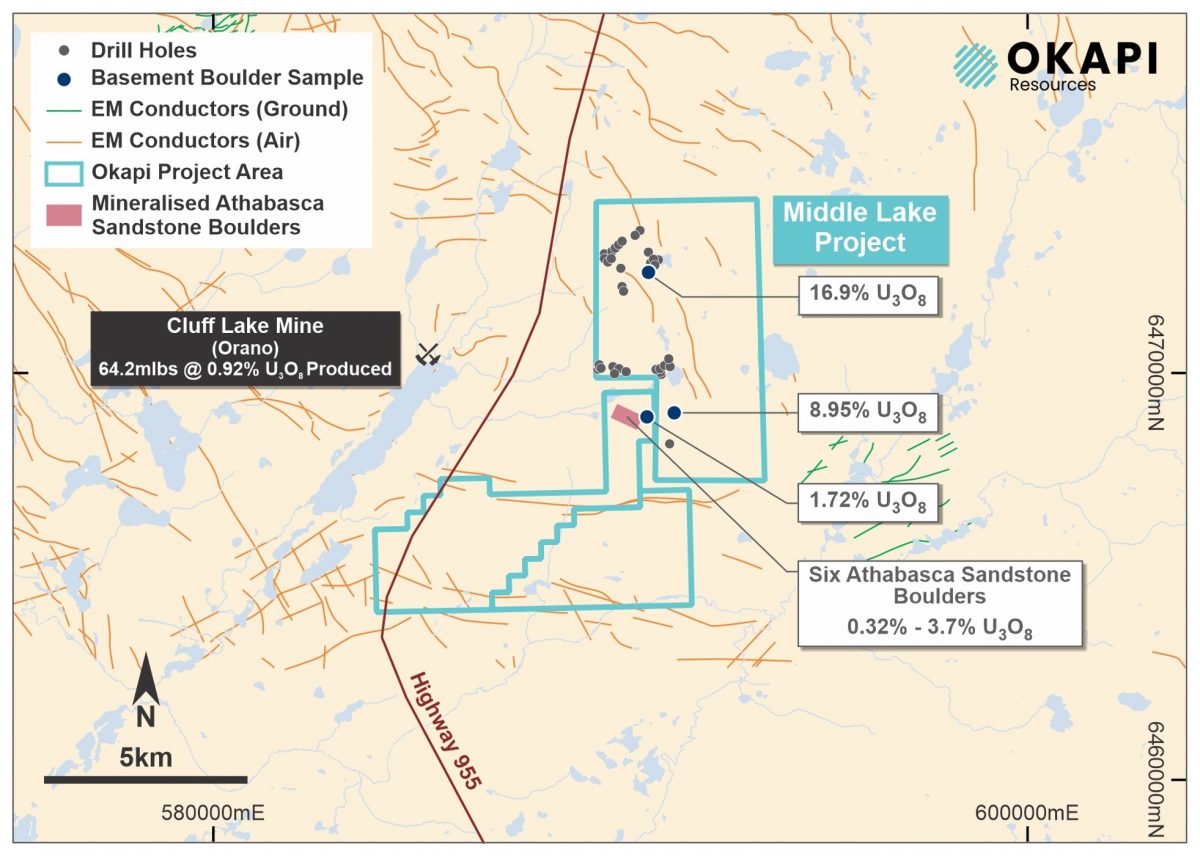 Newnham Lake consists of 14 claims totalling 16,940 hectares where multiple intercepts with grades between 1,000ppm U3O8 and 2,000ppm U3O8 have been intersected in relatively shallow historical drilling within a 25km folded and faulted conductive trend. Importantly, the depth to the Athabasca Basin unconformity at Newnham Lake is approximately 100m deep mitigating the need to drill deep holes in order to discover either sandstone or basement hosted uranium mineralisation. Several high-impact drill targets have been identified at Newnham Lak. A single hole was drilled on the property in 2018 returning 7.2m @ 310ppm including 0.5m @ 1,274ppm U3O8. 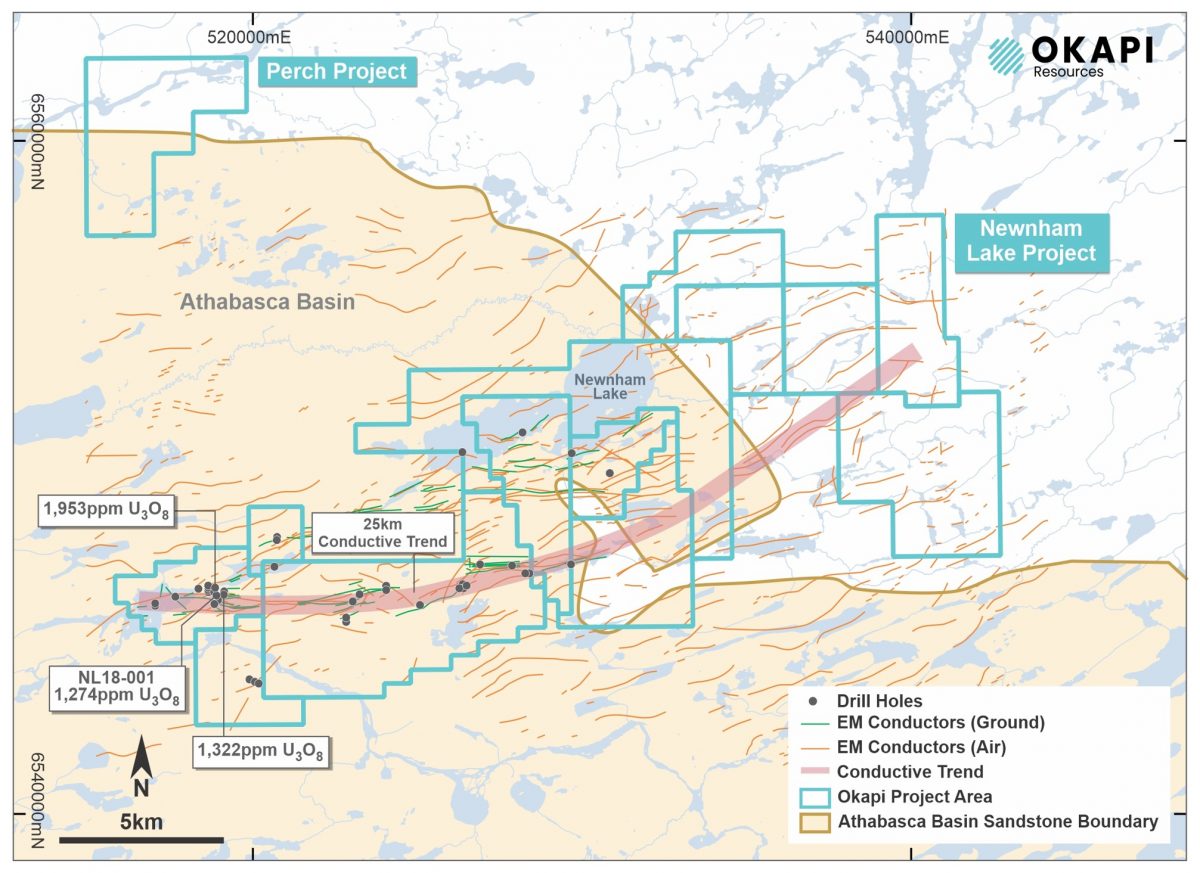 The Perch Project is highlighted by a prospective 4km long conductive trend leading from the Athabasca Group sediments and into Precambrian basement rocks. Two holes have been drilled into the trend with one of those holes returned 498ppm U3O8 and anomalous Cu-Ni-Zn, pathfinder elements for uranium mineralisation and the other returning grades of up to 504ppm U3O8.

The Lazy Edward Bay Project is approximately 55km west of the Key Lake Mill (Cameco) and 55km east of the Centennial Uranium Deposit (Orano-Cameco). Historical drilling has returned grades of up to 908ppm U3O8 with anomalous nickel, boron and other pathfinder elements.

The Argo Project is located near Cameco Corporation’s Centennial Uranium Deposit and Dufferin Uranium Zone. A high-sensitivity airborne radiometric survey was flown in 2018 and identified several areas of anomalous radioactivity, including certain spot anomalies that could represent the presence of radioactive boulders. Approximately half of the targets have been ground-truthed with the discovery of boulders considered highly anomalous in uranium.